For a while now, I've wanted to take a stab at stylizing some old cartoon characters, and TMNT was always on that list.  So I decided to take a crack at everyones favorite Pig... Bebop!
Its acrylic and colored pencil on canvas paper.  The proud new owner of this piece is none other than the TMNT flag waving fan, Kahl Drogo himself, Mr, Chris Silva.  It lasted approximately 22 seconds on the podium before he came stomping down the lane with rage in his eyes thinking someone may have already taken it.  Alas, it was there, and it is his now.  And all was happy in the land.  Hope ya like it dude.  Heres some process pics should you want to peruse. 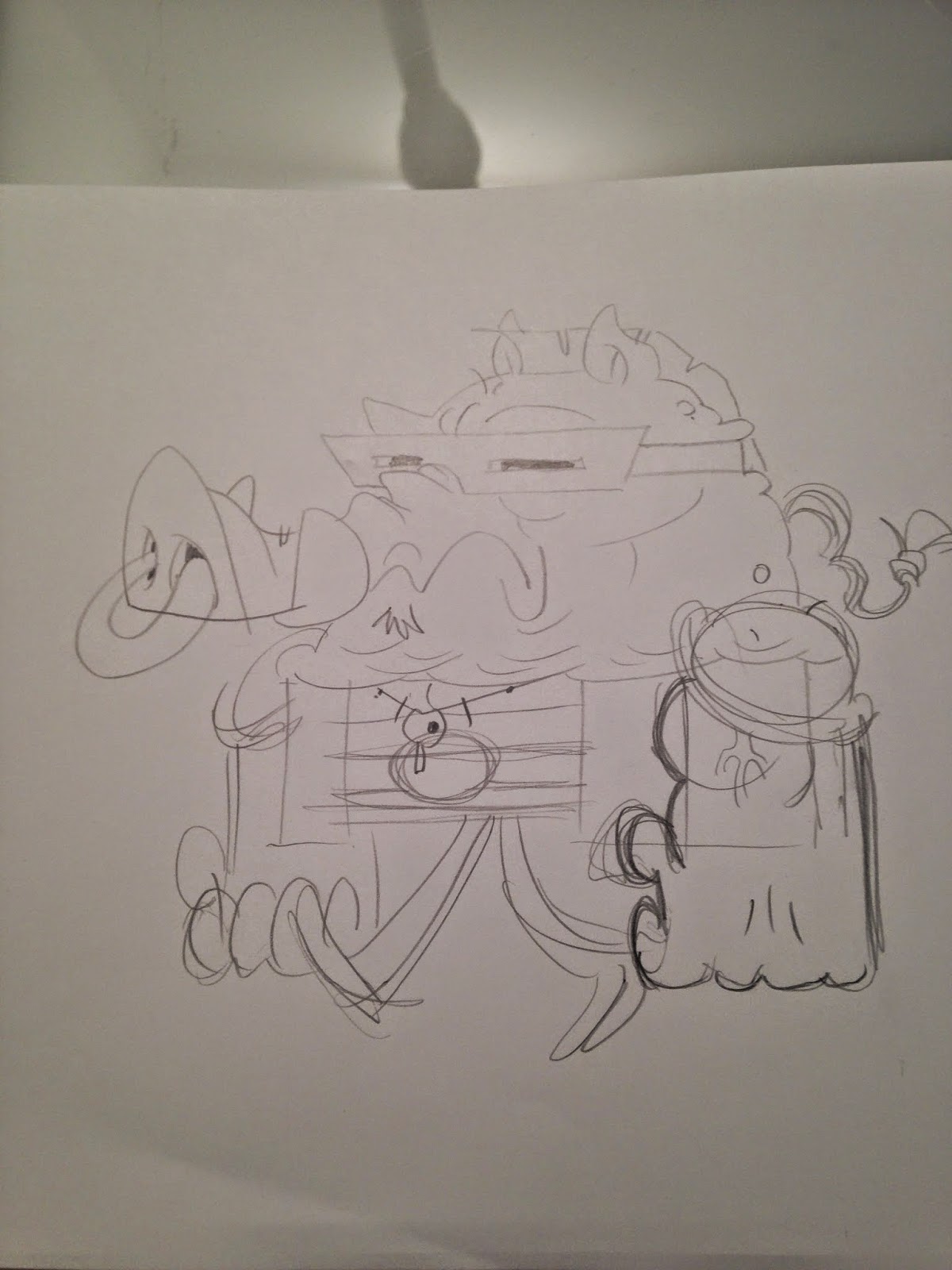 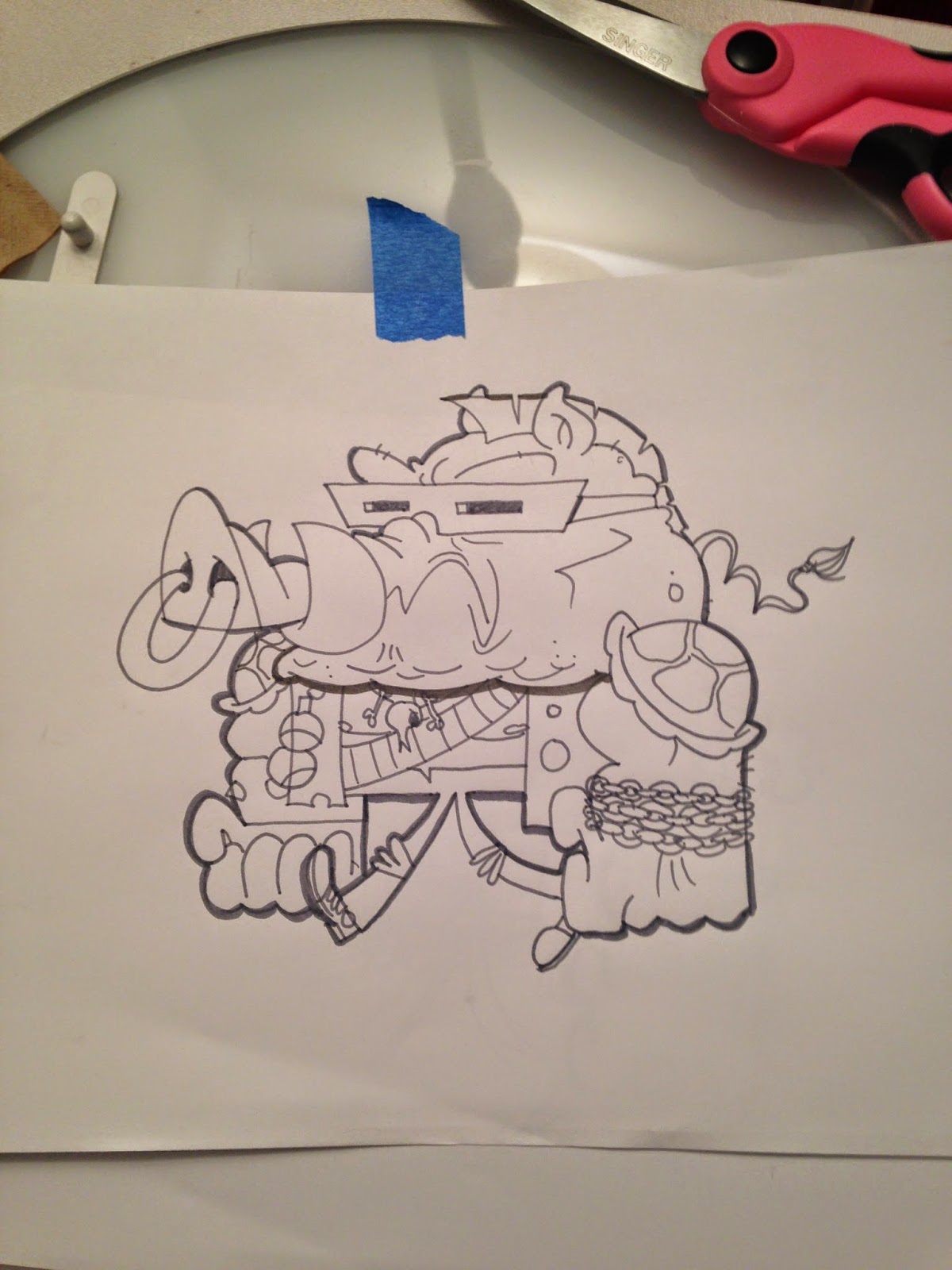 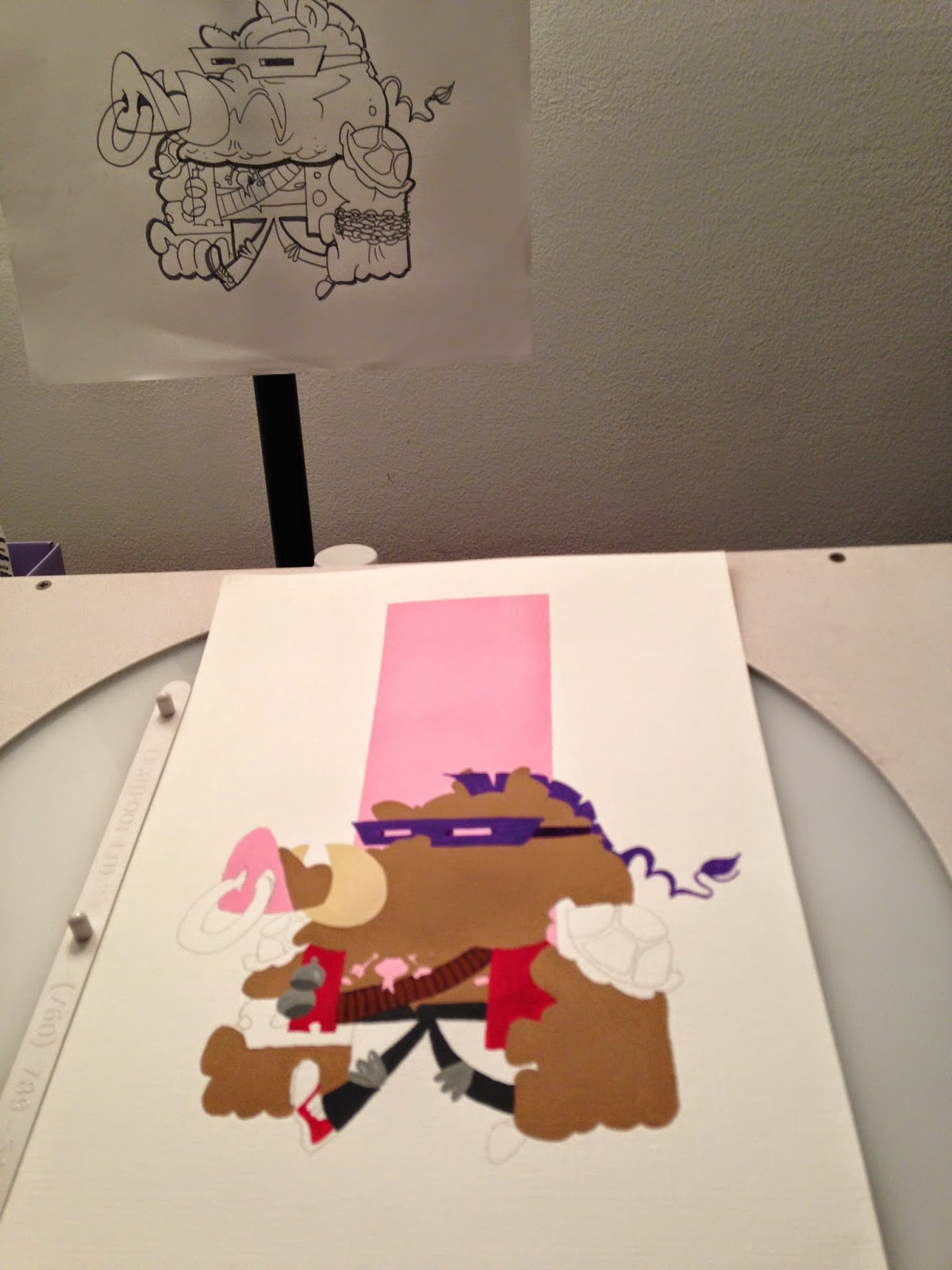 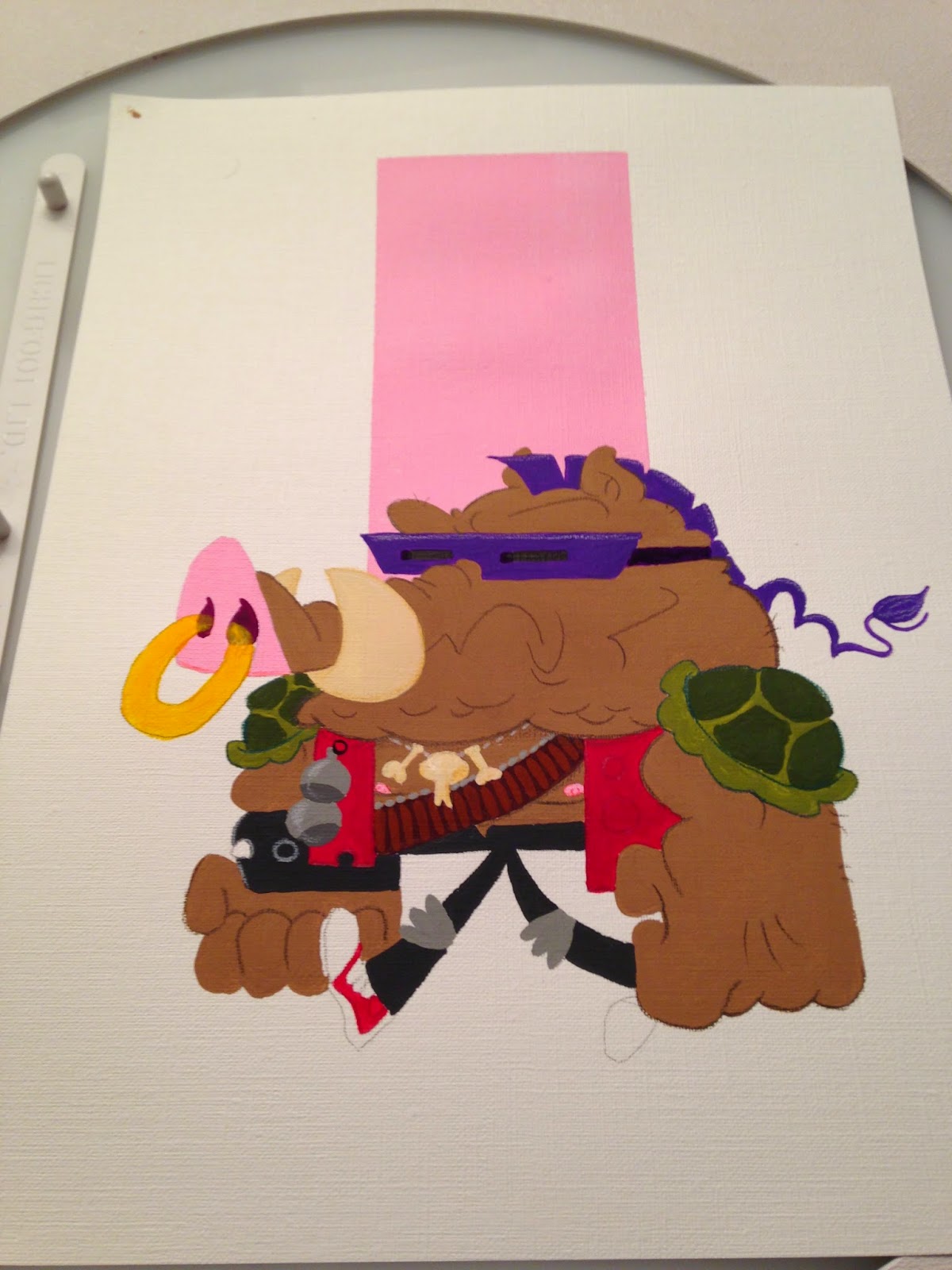 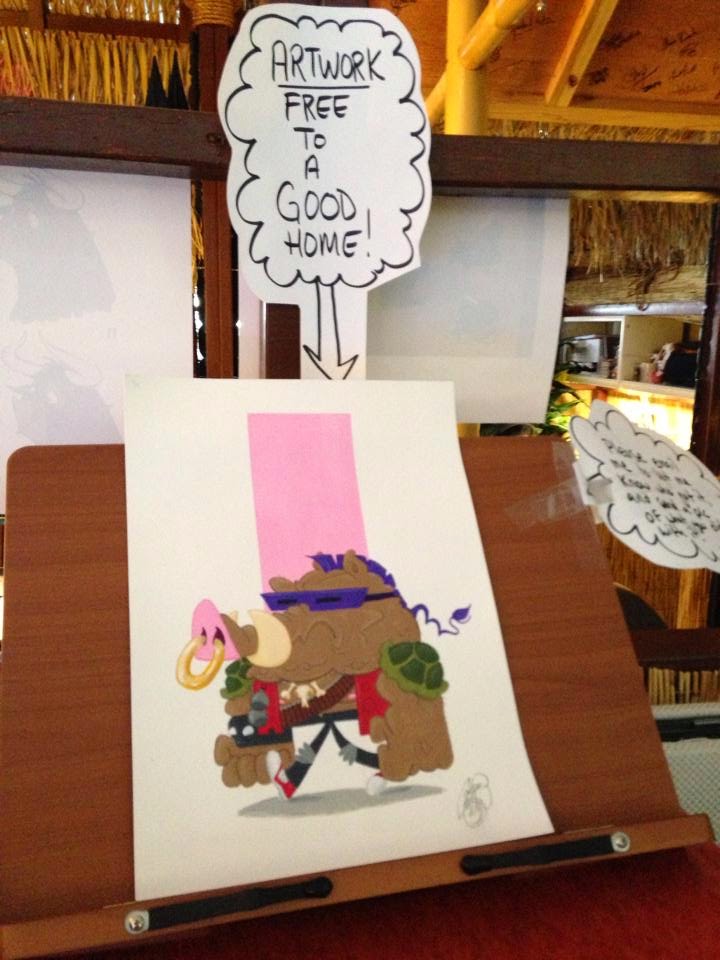 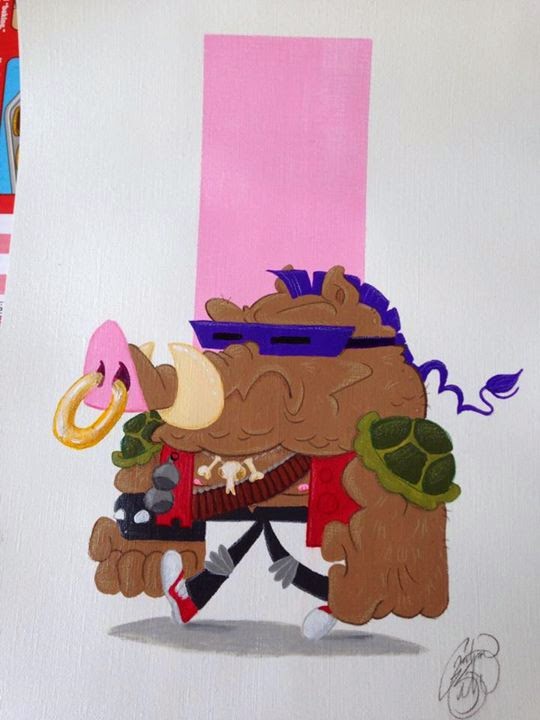 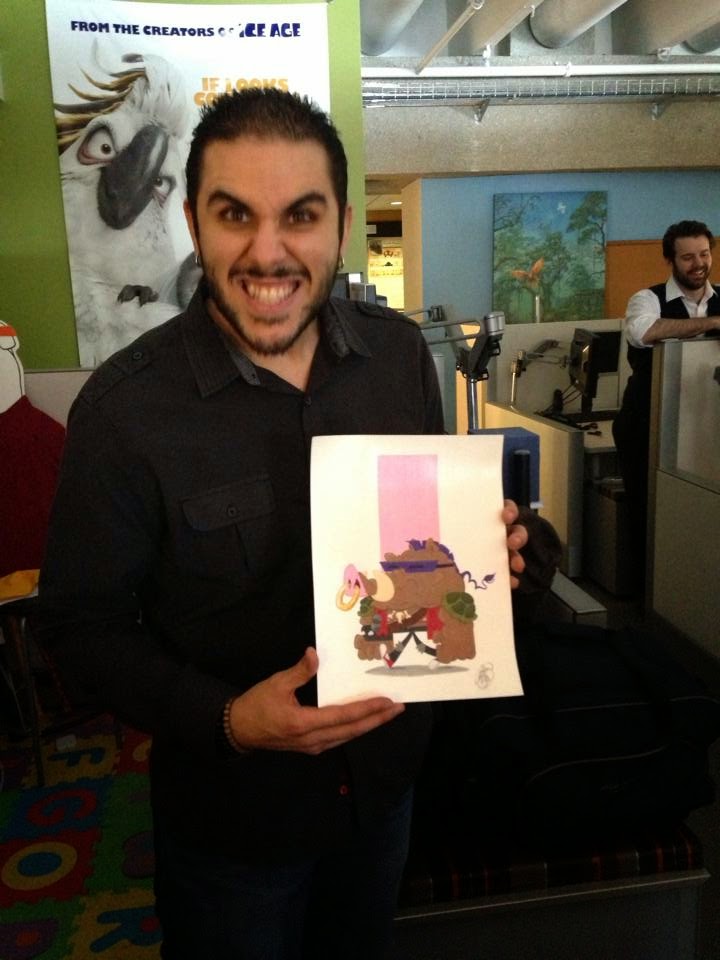 
Posted by Graham Silva at 4:02 PM No comments:

SWEET SASSAFRASS - I haven't posted in FOREVER. I'll try and remedy that.

Well, when I'm not busy animating these days, I'm trying to do a lot more artwork. Drawing, Inking, Painting, etc. Trying different mediums and subjects and really just trying to get better!

So, I've set up a little stand at my desk at work, on which, every once in a while, I'll put a piece that I've done up for grabs to go to a Good Home.

First to snag it keeps it.  Simple as that.  Easy Peasy.  If they so wish, the new owner can leave a donation towards supplies for the next piece, but no strings attached.   Well, 1 string....  All I ask is that people send me a pic with whatever they do with it.

Piece #1
I've always wanted to do caricatures of the Anchorman Cast, so here's a first attempt at Mr. Burgundy. Its acrylic on wood and painted on Rich Mahogany...stained wood.

In the words of the man himself... I'm gonna put it out there; if you like it, you can take it, if you don't, send it right back. aaaaaaand it was snagged by Mr. Drew (Drewgie Howser) Winey! 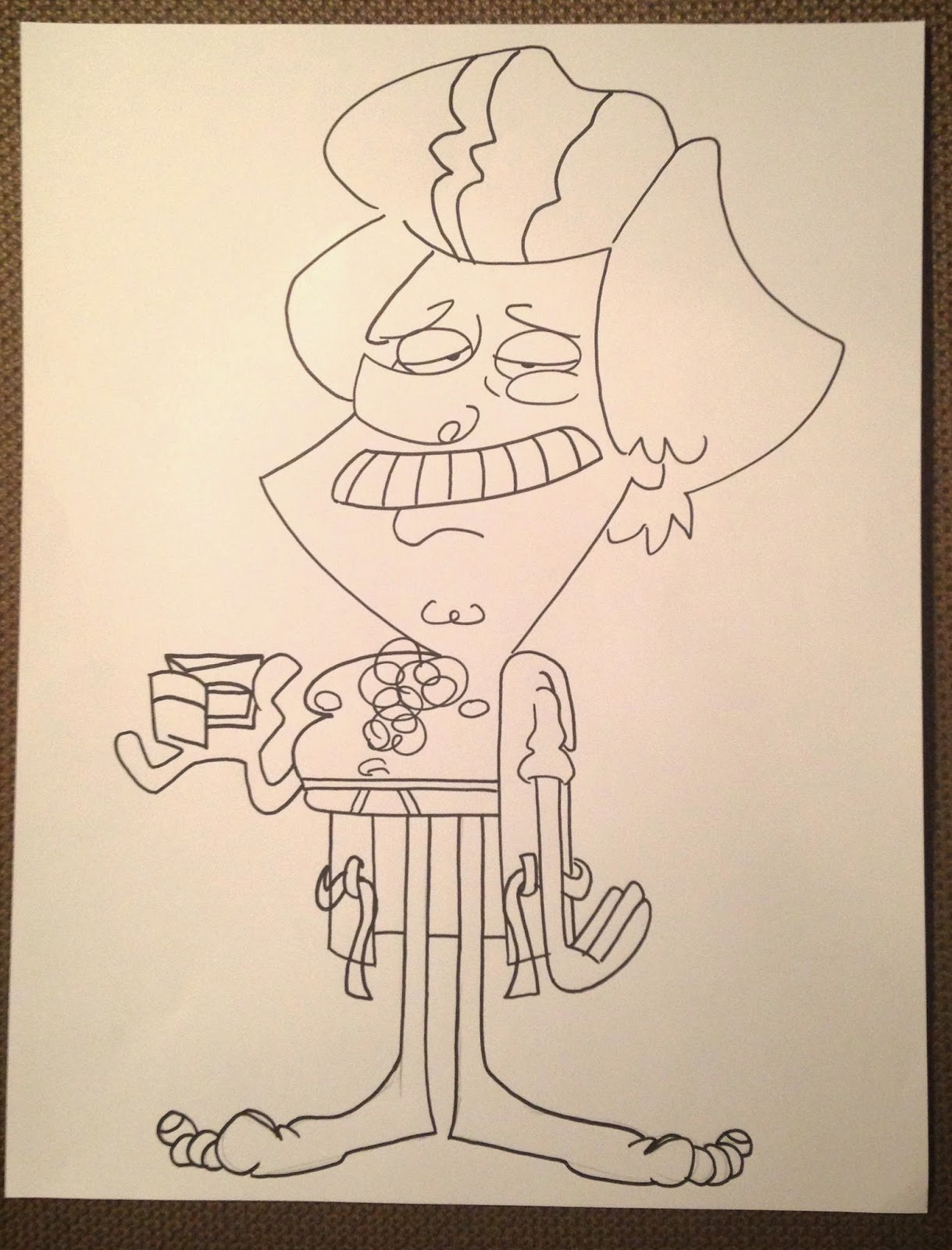 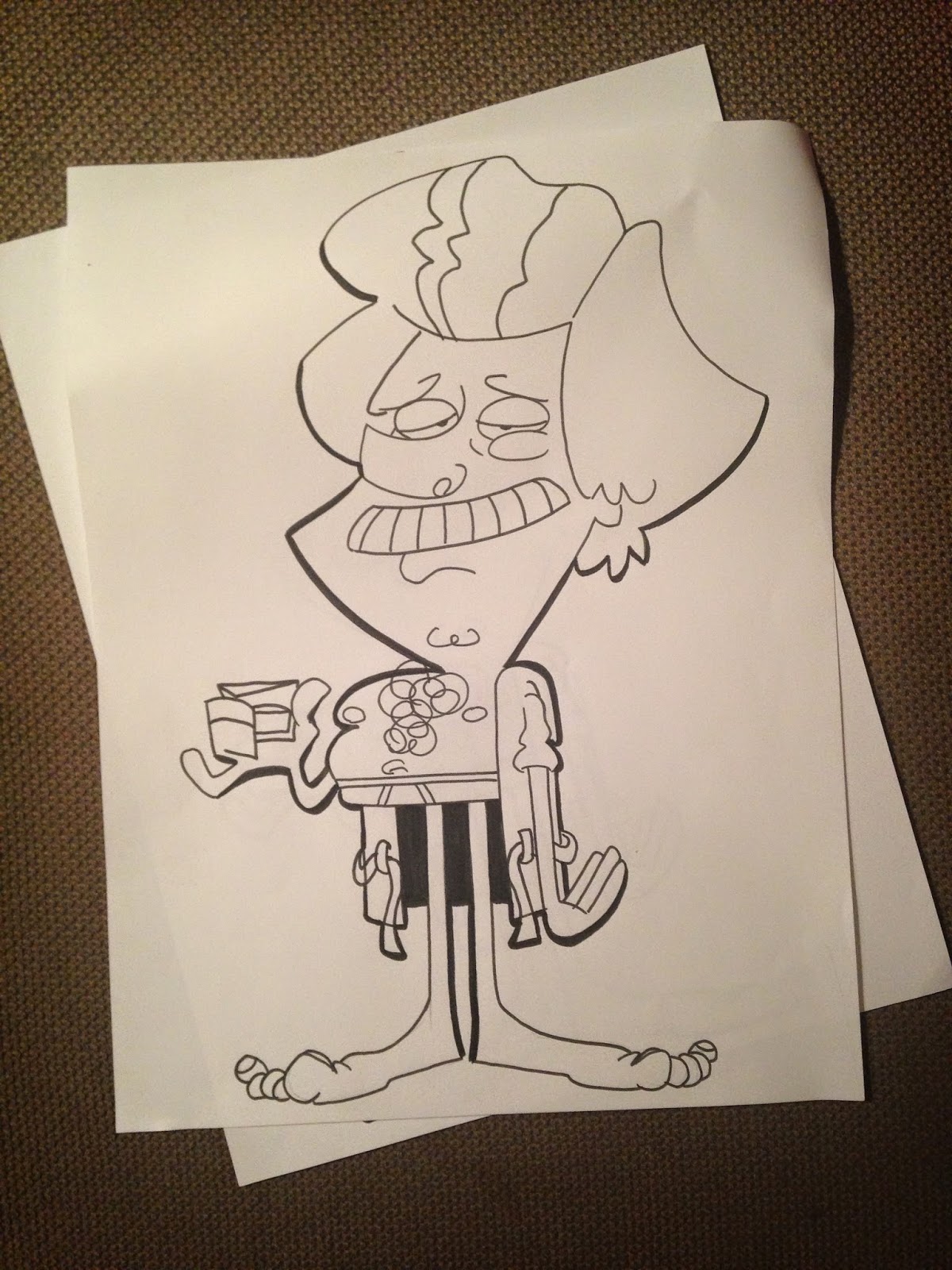 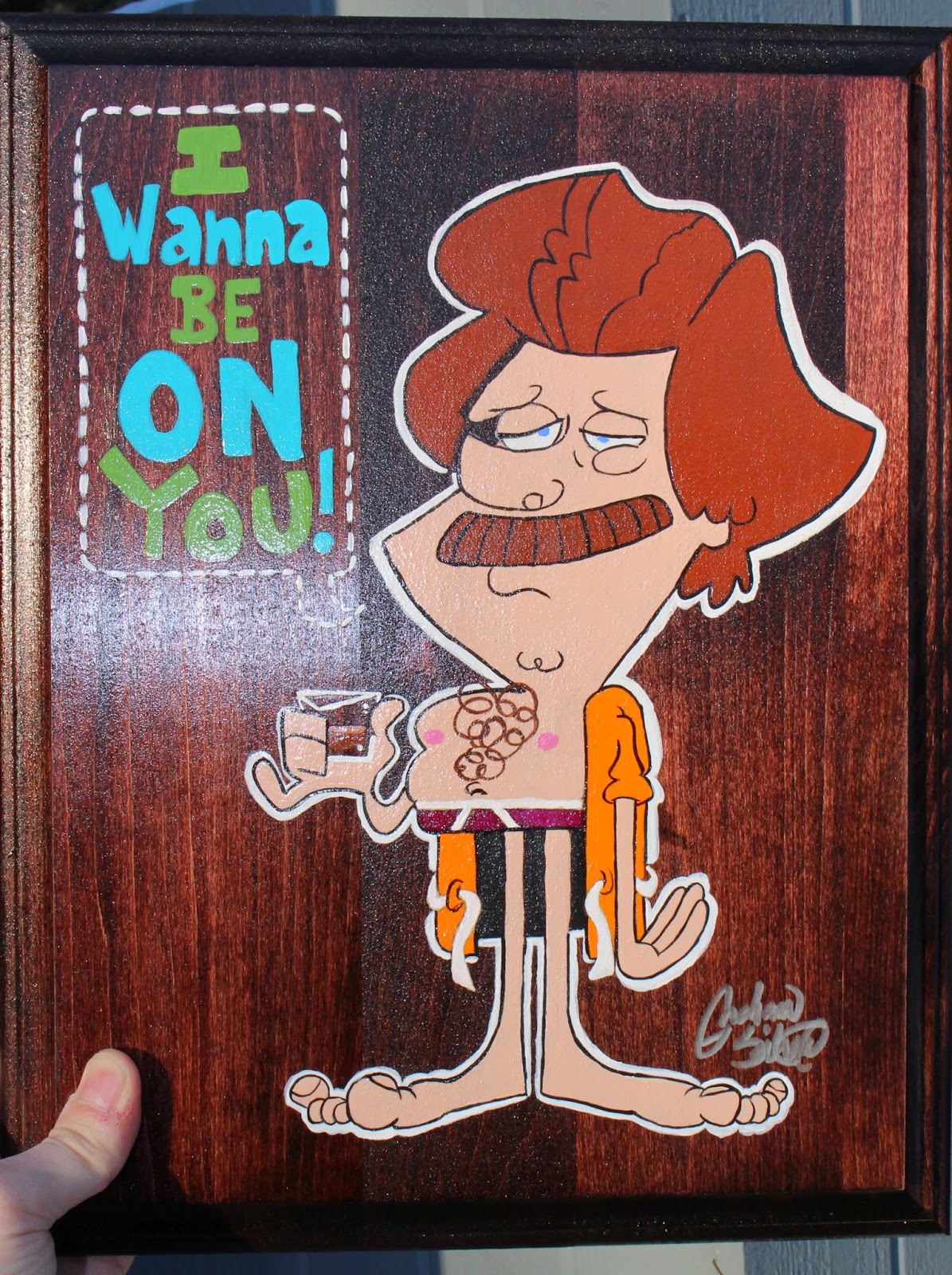 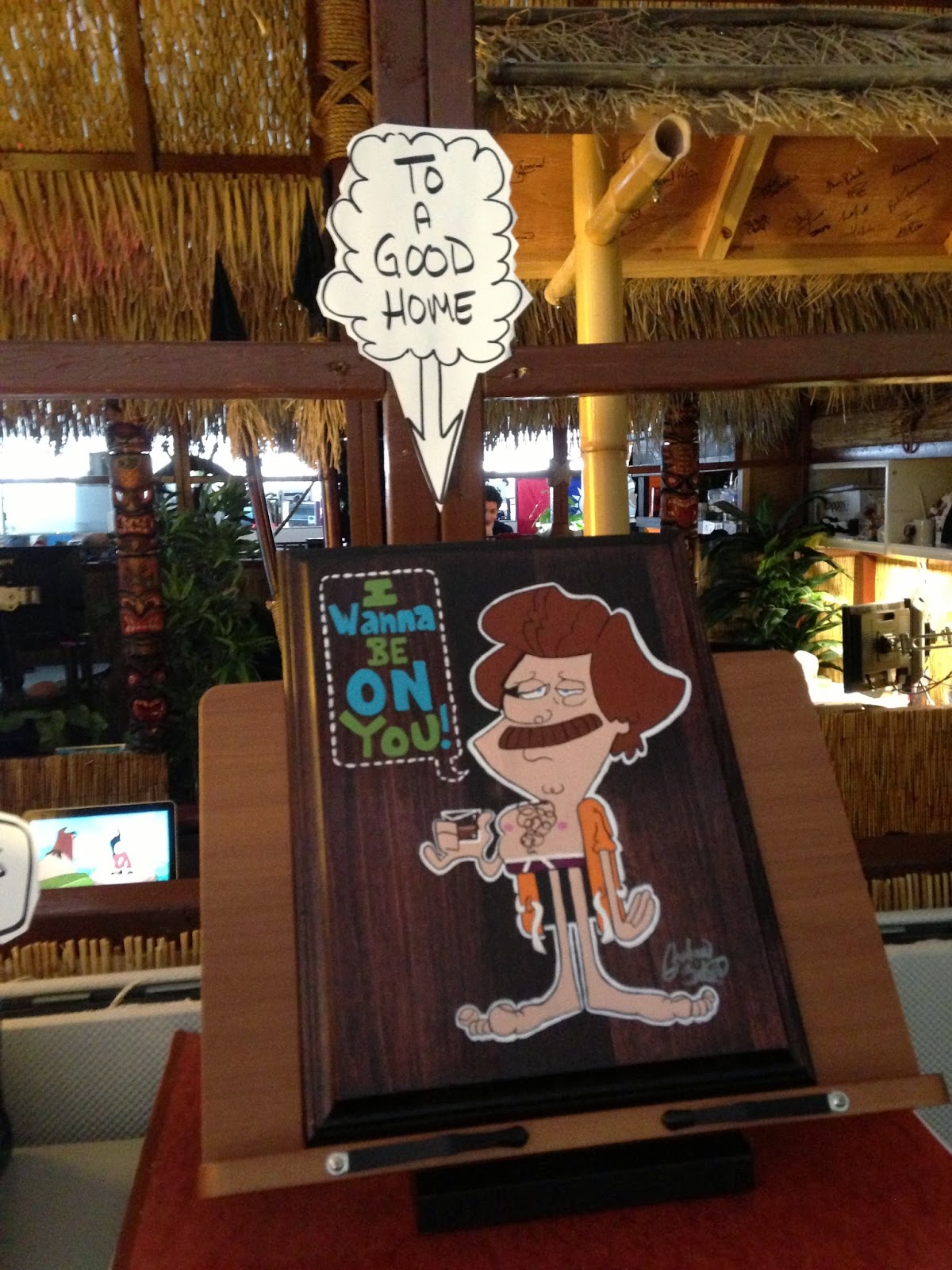 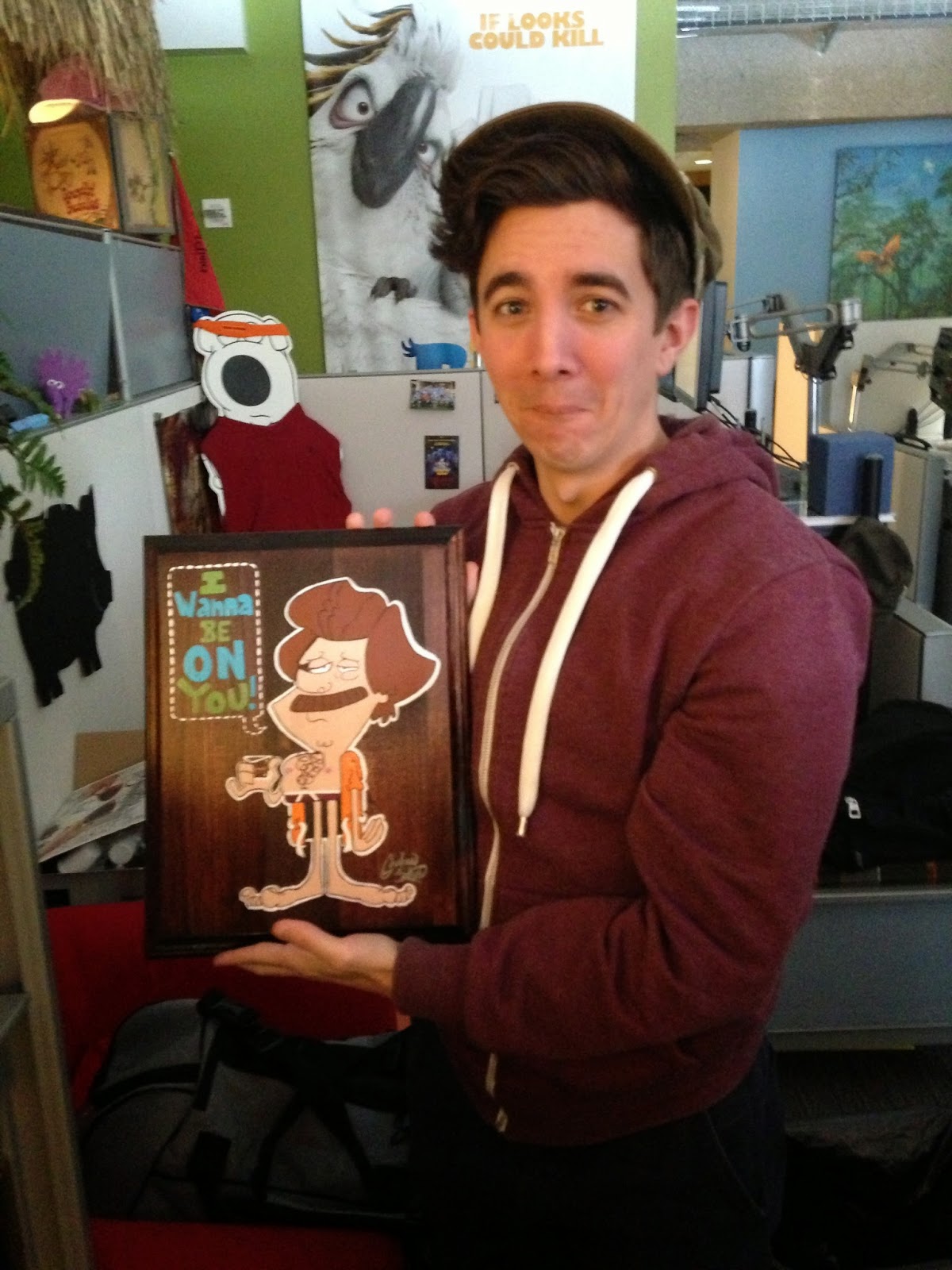 
Posted by Graham Silva at 6:40 PM No comments:

Well, I haven't put one of these together in a few years, so here we go.  My 2013 ShowReel, with selected shots from my time thus far at Blue Sky.  Shots are from RIO, Ice Age 4, EPIC & the Teaser for RIO2.


GSilvaShowReel2013
ps.  Many thanks to my pal Jeff Gabor for helping edit this together for me.  You sir are good people!

Posted by Graham Silva at 8:17 PM No comments:

The Adorableness that is Pebbles Stone!

Wow its been forever and a day since I last posted anything.  I am Ashame.

This Chunky-Monkey is Pebbles Stone, my friend Deb's little Chihuahua.  Don't let her size fool you, she can be fierce!  She will growl at you until you pay respects by purchasing her friendship with a wealth of Carrot Treats. 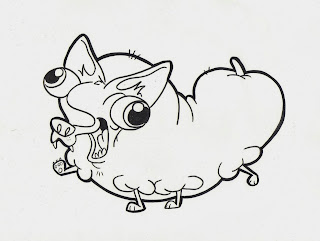 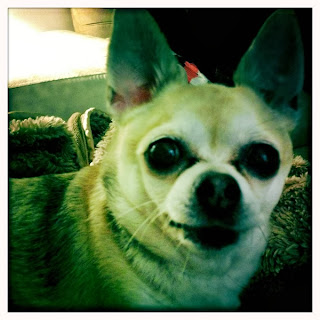 BOW BEFORE me.... OOO CARROTS!


Posted by Graham Silva at 2:25 PM No comments:

For the good of your mortal souls, take a gander at this here short film.  A heartfelt, feel good yarn spun by some really damn fine people.  A lot of hard work was poured into this project and it turned out quite lovely!  Give it a viewing and please share with your friends.

Tell Her This - Short Film from Gregory Rizzi on Vimeo.

- Love Graham
Posted by Graham Silva at 6:17 AM No comments:

Heres another caricature, this time, of my friend and fellow cube-mate, The always Daper & Dignified,  Mr. David Sloss, Esq.  He's a damn fine animator, which would be bad enough, but couple that with his snappy dressing and posh British accent, and he seems to be on a plane above the rest of us.  That or the fact that he's like 8feet tall, that could be it.  Did I mention he drives a Mini.
Pip Pip Jolly Good Show sir.. WhatHO, would you look at that, its Tea Time. what.!! 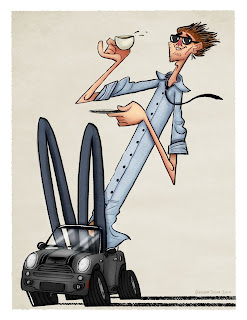 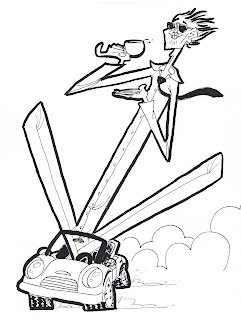 Until Next time then, Cheerio!

Posted by Graham Silva at 7:38 PM No comments:

A case of DEJA vu.

One of the many things I love about being part of the Blue Sky Anim Team is hearing from some fantastic guest speakers.  A few weeks back, one such presentation was given by none other than Mr. Andreas Deja  (http://andreasdeja.blogspot.com/).  Needless to say, for the entire team, it was pretty GeekTastic.  Andreas spoke for about an hour about his beginnings, his life in animation, and insights on being part of some really amazing films.  Who Framed Roger Rabbit, Beauty & the Beast, Aladdin, and The Lion King to name but a few.  He delved into his thought process on creating/designing characters like Aladdin's sinister villain Jafar, using video clips and drawing live on screen for us all to see.  It was super inspiring!

After the talk, he was kind enough to hang around a while, take some photos, and chat with some of us animators.  I took the opportunity to thank him for his work, as some of the films he had a big part in
( Beauty & the Beast, Aladdin & The Lion King specifically ) had a great influence on me artistically.

All in all he was a super nice guy, who kept us all enthralled with great tales of animation wonder.

Heres a couple pics taken of us after the talk.  The first is the original shot, where Mr. Matt Doble sidled on up as the pic was being taken, and Andreas said, "No Problem".. then looked at me and said, "We can just crop him out later".  The "Cropped" image is there too, but we all had a good laugh at the comment, so I added em both!  High five Doble! 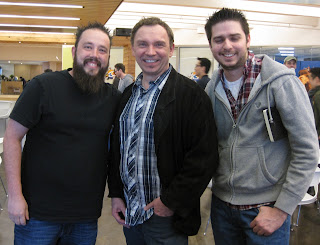 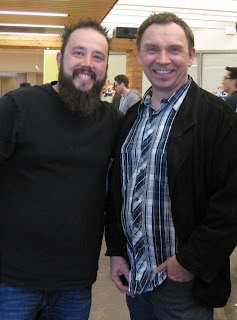 -Love Graham
Posted by Graham Silva at 6:25 PM No comments: